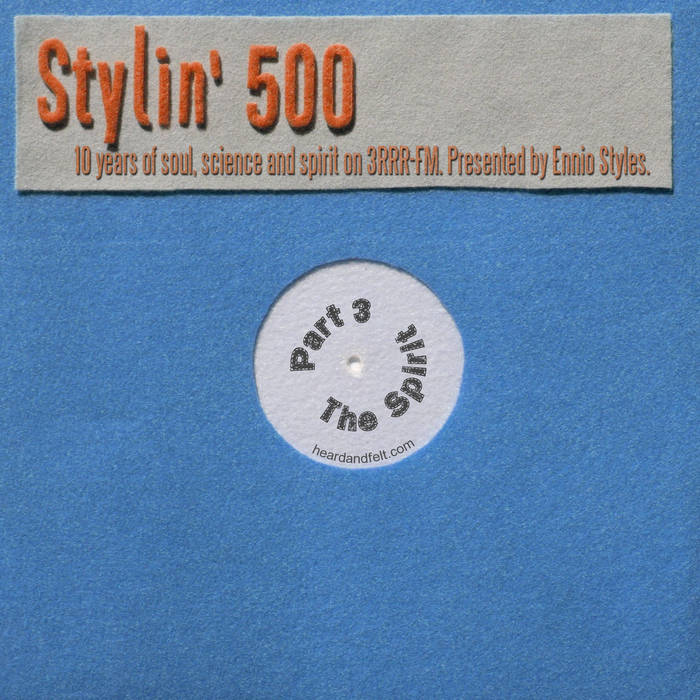 Part 3 is about music with flavour, covering funk, boogie, jazz, hip hop and even some reggae, Bollywood and brass band elements.

Ennio Styles & Spray Tandoori add some Bollywood spice to the orchestral hip hop grandeur of The RAah Project, while related group True Live provide an unreleased instrumental version which could have come from the RAah album. More authentic Bollywood sounds come from The Bombay Royale, a new Melbourne band specialising in recreating the funk and surf sounds of 60s and 70s Bollywood.

Kiwi drummer/producer Julien Dyne manages to cram a hip hop lean, reggae skank, funk strut and even latin clave into a single tune not on his recent album licensed to BBE Records. Cy Gorman (formerly known as Soul Mirage) is a Melbourne producer and multi-instrumentalist who has been close to Stylin' for the duration, and he teams up with late keyboard maestro Will Poskitt for an unreleased feelgood headnodder. We get another unreleased instrumental from Billy Hoyle, a Melbourne beatmaker for whom samba is as important as hip hop.

Jowin is a new MC from Macon, Georgia who has a funky fresh style and loves The Pharcyde too. Reggae is not a big part of Stylin', but if more of it sounded like Mista Savona's instrumentals, that could change. Despite the recent resurgence of interest in brass bands like Hypnotic Brass Ensemble, Hot 8 Brass Band and The Hackney Colliery Band, this amazing jazz funk piece from Virginia's No BS! Brass seems to flown under the radar. Led by Melbourne percussionist Elvis Aljus, Gypsy Brown have releases on Freestyle Records and smash 'Stepping Stones' here with furious flute and percussion doing battle on this unreleased tune.

Also known as Spruce Lee, Sydney DJ and producer Toni Toni Lee has made a tune that could sit equally well in a funk, disco, house or breaks set. From Melbourne via Adelaide, Inkswel is on the rise with his boogie and hip hop influenced productions, making links with US and European labels like Rush Hour, Project Mooncircle, Faces and Superior Elevation. California's The Samps go disco funk with a tune that sounds like Letherette cutting up some old Chic. Which leaves Manchester bassist and regular Lamb collaborator Jon Thorne, with a jazz funk cut worthy of the Groove Merchant label.

HF003
Compiled by Ennio Styles.
Additional mastering by Kirk Degiorgio.
Special thanks to all the artists and labels involved.
Thanks to 3RRR-FM and its amazing community of staff, volunteers, subscribers and listeners.
Inspired by everyone who has made, played and relayed the music I have been airing on Stylin' since 2001.

Frayle's Gwyn Strang and Sean Bilovecky join the show to talk about their cathartic new album.