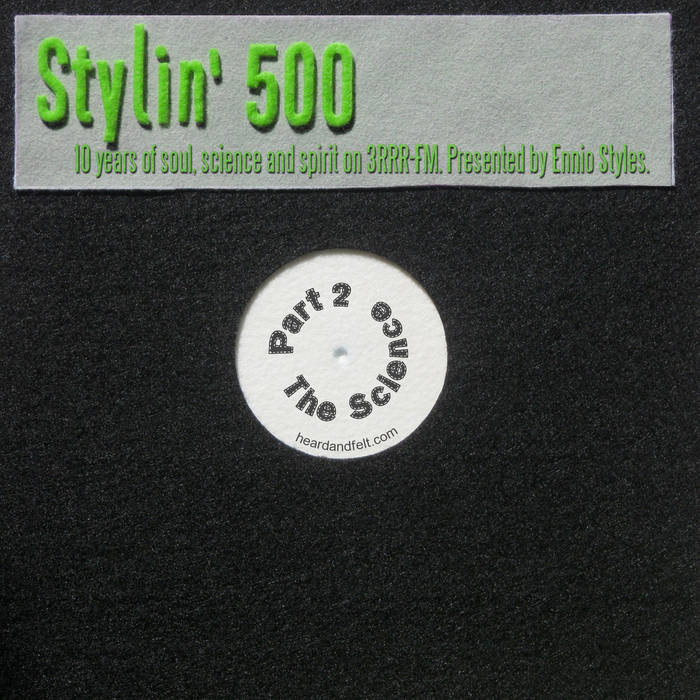 Part 2 explores the electronic side of Stylin' with techno, dubstep, broken beat, future beat science and other synth-heavy hybrids.

Canada's Sekoya kick it off with an ambitious tune that sounds like Weather Report remixed by IG Culture, with Laurie Anderson on jazz vocals. Sekoya's vocalist Amalia recently released her solo album on Tokyo Dawn Records. Crumbs, Electric Sea Spider, Plutonic Lab and Indelible are Australian beatmakers who rise above a crowded and mediocre beat scene with creativity and depth. Parisian MPC-whiz Fulgeance has long been a Stylin' staple with his 'smartbanging' mix of club-friendly energy, hooks and synths with intricate compositional and production twists.

With 'Fly or Die', NZ saxophonist and syntheologist Lewis McCallum channels P-Funk and Sa-Ra Creative Partners. Salva gives a San Franciscan translation of Joker's synthy 'purple' dubstep sound. Ex-drum & bass producer Motive's unreleased track sounds like Seiji doing a midtempo double bass jam. Meitz and Opolopo are two of Europe's answers to Headhunters-era Herbie Hancock, and here they get into the more electronic side of nu jazz and broken beat, the latter coming off like Azymuth on crack. Melbourne's Harmon and synth collector Hanna Silver close things on a dreamy note, with touches of Air and Stereolab.

HF002
Compiled by Ennio Styles.
Special thanks to all the artists and labels involved.
Thanks to 3RRR-FM and its amazing community of staff, volunteers, subscribers and listeners.
Inspired by everyone who has made, played and relayed the music I have been airing on Stylin' since 2001.

Sampa The Great joins the show to discuss her release, "As Above, So Below".