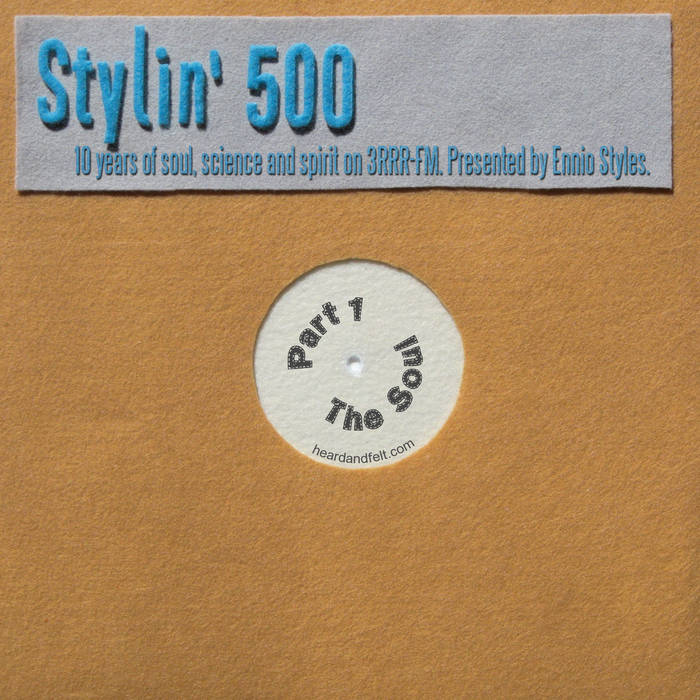 Part 1 presents the soulful side of hip hop, jazz, boogie and, er, soul.

Native American/black singer Kyra Climbingbear gets things started with the anthemic rock-tinged 'Champion' featuring a verse from John Robinson (Scienz of Life). Micah St James and Imani (of The Pharcyde) represent the LA hip hop scene, with Imani riding a smooth Spaceboy Boogie X production previously only available in Japan. Amin PaYnE and Andras Fox are two upcoming Melbourne beatmakers, here demonstrating their soul-chopping skills. Atlanta jazz/soul vocalist Nonameko lays it down over a sweet production from Tanya Morgan's Von Pea. Monica Blaire (who has sung for Waajeed/PPP, Andres and Black Milk) teams up with her Detroit-based Silent Riot crew for a nearly acappella version of Zapp. US vocalist Olivier Daysoul has collaborated with Hudson Mohawke, Onra and Oddisee and teams up here with London's Andre January for an unreleased uptempo jam that should appeal to fans of Prince and Outkast's Andre 3000.

Lanu and Mark de Clive-Lowe (half of The Politik with Bembe Segue) have been friends of Stylin' since the beginning and explore the space between jazz, soul and club music. The late Abby Joyce delivers a heavenly vocal on Lanu's tune. Germany's First Touch stay true to the 80s boogie sound in all but the title's reference to '2011 Mix'!

Four emotional vocal jazz tunes round out Part 1. John Ellis is a Mancunian keyboardist who has played with Cinematic Orchestra and DJ Vadim. 'He Speaks (Live)' by LA's Nailah was first played on Stylin' in 2009, setting off a chain of events that led to Gilles Peterson airplay and gigs, collaborations with Robert Glasper, Nicola Conte and Jose James and a record deal with Universal (as Nailah Porter). Since then this song has been unavailable and Ennio Styles' edit (which includes three minutes of additional material from the original performance) is released here for the first time. The WES Group hail from Washington DC and here offer some gospel-tinged jazz with shades of their Baltimore friends Fertile Ground. Versatile NYC-based trumpeter and vocalist Leron Thomas closes Part 1 on a reflective note with a jazz ballad reminiscent of Tribe's Doug Hammond.

HF 001
Compiled by Ennio Styles.
Additional mastering by Kirk Degiorgio.
Special thanks to all the artists and labels involved.
Thanks to 3RRR-FM and its amazing community of staff, volunteers, subscribers and listeners.
Inspired by everyone who has made, played and relayed the music I have been airing on Stylin' since 2001.

Frayle's Gwyn Strang and Sean Bilovecky join the show to talk about their cathartic new album.